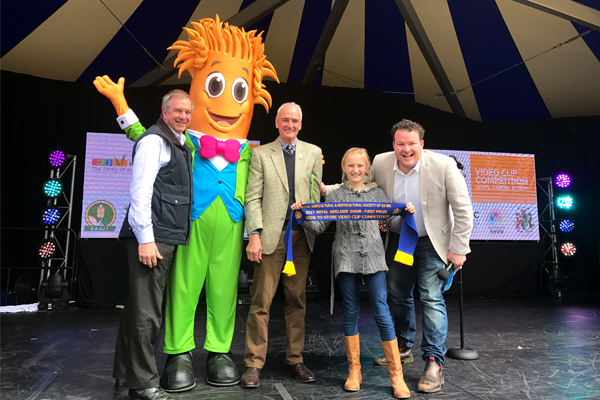 ENCOURAGING students and the wider community to engage with the Australian grains industry is the aim of the Seed to Store Video Clip Competition.

Grains ambassador Andrew ‘Cosi’ Costello took to the stage at the Royal Adelaide Show in September to announce the 2017 winners from a tough field of competitors.

A student entry telling the story of how canola oil is made and a community entry celebrating the grain industry won the blue ribbon prizes and were awarded $1000 each.

Cosi presented the awards, along with representatives from the competition’s sponsors, Malcolm Buckby from the South Australian Grain Industry Trust, and David Shannon, from the Grains Research and Development Corporation.

“The Seed to Store competition involves students and community members making a one minute clip promoting the story of grains from paddock to plate,” Cosi said.

“We receive entries from across Australia so it’s great to see the footage of what grains mean to so many different people.”

Mr Buckby said the 2017 competition attracted an impressive range of entries which showcased how farmers, scientists, agronomists and agribusinesses work together to produce high-quality grain for Australian consumers.

“The competition is a great way to connect industry, schools and the wider community while promoting the grains industry,” he said. “We had a great time judging the competition and thank all entrants for their submissions in the school and community categories.”

First place in the school student category was Chelsea Wilksch, who lives on a farm at Yeelanna on SA’s lower Eyre Peninsula which grows canola, wheat, barley and pulses. The clip told an impressive story of how the canola grown on her family farm is transformed into canola oil.

Second place in the school category was awarded to Katelyn Randall, Mackenzie Walter and Hana Green from Cummins Area School for their parody ‘Let it Grow’, while ‘Seeds to Splendid’ by Lachlan Etherton placed third.

In the community category, first place was awarded to brother and sister team Mark Habner and Britt Glover, Cummins, for their creative ode, ‘Cheers to being part of ag’.

“This clip showcased how many people play a role in producing great grain – from research scientists to agronomists, communicators to financial managers and more. Both the footage and story were excellent,” Mr Buckby said.

Lisa Richardson, Cummins, was awarded second in the community category for her clip ‘Glorious Grain’, and third was ‘Your Golden Year’, by Sascha Estens, Merri-May Gill, Fi Claus and Sean Robson.

An encouragement award was given to students from St Stephen’s Catholic School, Pittsworth, Queensland, who submitted a range of clips showcasing crop growth and production.

Along with the video clip component, the Seed to Store initiative has also supported Cosi to work with the education team at AgCommunicators – convenors of the competition – to visit schools throughout rural, regional and metropolitan SA. More than 600 students were visited in 2017.

The Seed to Store Video Clip Competition is an initiative of the South Australian Grain Industry Trust and the Grains Research and Development Corporation, with support from the Royal Agricultural & Horticultural Society.